How to flourish in an uncertain world

A community and resources for agile strategy contributors and practitioners

Today’s world is changing rapidly. The future, in many cases, is uncertain, complex, and hard to predict. But to succeed, a business needs effective direction to focus efforts, make better choices, optimize organizations to adapt as the situation changes, and perform. The alternative is reacting to events after they have taken place. Those able to develop and execute their strategy without the benefit of certainty have an inbuilt competitive advantage which is difficult to replicate.

WHAT COULD AN AGILE STRATEGY BE?

Some established corporates have been scaling up agile ways of working by deploying hundreds of autonomous squads. The tantalising questions are how strategy should provide ‘unity of effort’ when agile is deployed at scale, how their operations, rather than just some of their processes, could become agile – and whether there is such a thing as ‘Agile Strategy’.

We believe that there could be. We do not have all the answers, which is why we are inviting you to join us in developing them. But we do have an idea of what a possible answer could look like.

‘Agile’ ways of working have gained a lot of traction both in and beyond their origin in software development.

The agile approach is based on semi-autonomous, multi-functional teams developing new products in small value increments known as ‘sprints’, testing them with users, reviewing them in ‘scrums’ and then going through the process again. It has a track record of improving speed and quality and allows rapid changes in direction. Hence its name.

Agile direction is about formulating strategic direction in a way that creates both focus and flexibility. Agile execution is about creating an operating model which can translate that thinking into focused flexible action and teams ready, willing, and able to adapt as the situation changes. This is how we represent it: 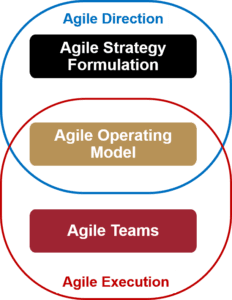 The purpose of this website is twofold: to build a community of practice of people willing to share their ideas, approaches and experiences of realizing organizational agility, and make available materials for people trying to put some of the principles into practice.

As a visual symbol of agile strategy, we have chosen a murmuration of birds as our logo.

Each bird makes an individual decision about the direction to fly in but also follows others. The result is to optimize cohesiveness and individual effort so that the flock responds instantly to changes in the environment.

No matter the size, the system works.

Download the Agile Strategy Manifesto
Find out what we offer

A COMMUNITY OF PRACTICE

This website is a home for Agile Strategy contributors and practitioners, providing resources and access to the expertise required to implement Agile Strategy solutions. We invite you to join the community to contribute to a growing body of knowledge and experience on Agile Strategy.

Join the Community of Practice

Agile Strategy is a 21st-century solution for implementing strategic agility in large complex organisations. It has three core components, an agile strategy formulation process, an agile operating model (connecting agile direction and agile execution) and agile processes at the team, or tactical, level.

FIND OUT ABOUT AGILE STRATEGY

Find out how we implement

SEE WHAT OUR COMMUNITY IS SAYING

“The biotech business lends itself to leading by intent – rapid alterations of tactical direction are required as biological data often surprises even from the most well-planned programmes. This was an example of this and the ability of the teams to pivot was exceptional”

We use cookies on our website to give you the most relevant experience by remembering your preferences and repeat visits. By clicking “Accept”, you consent to the use of ALL the cookies.
Cookie settingsACCEPT
Manage consent