Companies put a lot of effort into setting goals. Most of them have an annual process called ‘goal setting’, ‘objective setting’, ‘performance management’ or similar. The results matter both to the companies and to the people given the goals, some of whom have bonuses linked to the achievement of targets which come wrapped in these processes.

Less effort is put into thinking through what makes a good goal in the first place. Here are some first thoughts. Rather than trying to be comprehensive, I have just chosen three features that distinguish good goals from bad ones.

Sometimes, visionary CEOs realize that their companies need to radically change their ways of working and set an apparently impossible goal in order to stimulate creativity. They challenge their organizations because they realize that the biggest risk to them is carrying on as before.

What is common to both groups is that they have a completely realistic grasp of the potential for innovation. Their situational awareness is acute, their vision is pragmatic, and the goal is carefully chosen. It may be ambitious, but it is realistic.

The problem comes when the goal has no logic behind it, the situation actually demands persevering with incremental improvements, and the organization does not have much stretch left in it. That is when an ambitious goal become unrealistic. Unrealistic goals are dangerous.

They are not uncommon. In the ten years up to 2019 no less than 20% of the 100 top U.S. and European corporations underperformed the market by 25% or more over a one to two-year period and lost their CEO as a result¹. By far the most common cause was the pursuit of an unrealistic goal related to growth.

Rather than simply focus on being good stewards of solid businesses and creating value for shareholders by returning cash, each CEO chose to take high risks to increase the pace of growth. They developed ambitious plans that ended up destroying value.

Good goal setting begins with a solid and sober grasp of what is going on – situational awareness. It then involves deciding what matters most now. That implies making choices.

A good goal tells you what to do and, if only by implication, what not to do. If it fails to do that, it is empty, abstract and incapable of guiding action.
To set a goal which says ‘do this and not that’, or ‘if in doubt, optimise this and not that’ means making choices.

Because of our education, doing this often feels unnatural, and it is indeed hard to do, particularly at the top of the organisation, which is where it makes most difference. High level goals tend to be abstract and dissolve into platitudes. It is hard to be high level and concrete. The key to doing so is making choices.

For example, the MD of a domestic boiler business set the high-level goal of the business – what I call the overall intent – as ‘optimise service to the installer’. This is high level because it applied to all the actions he wanted his managers to take – if an action improved service to the installer he would do it and if it didn’t he wouldn’t do it. But it is concrete because it makes two choices. Most people thought domestic boilers was a product business. He claimed it was a service business. Most people thought the key purchasing decisions were taken by the end-user. He claimed they were taken by the installer.

These implied choices enabled each level below the MD to translate his intent into goals of their own which guided action: 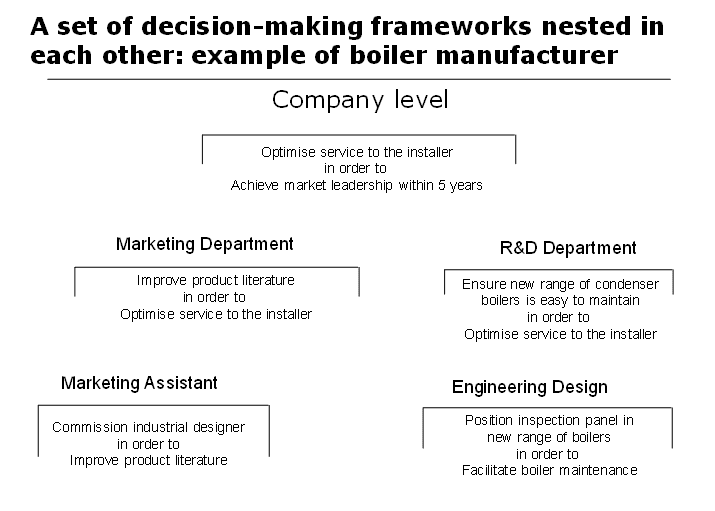 That brings us to the final point.

Concrete high-level goals can be translated into lower levels goals that are nested in them. Each level draws out the implications of the higher level for the decisions they are facing.

The whole set of goals form a hierarchy which acts as a framework for decision making. As a framework they do not specify what further lower-level (i.e. more specific) decisions should be, but tell others what they need to know in order to take decisions of their own. In this way, although these decisions are taken independently, they will nevertheless form part of a coherent structure.

Any extraneous goal which is added from outside the structure will lead to the dissipation of effort and confusion. Part of the discipline of goal setting is knowing when to stop.

Setting good goals is a skill. No-one is born able to do it. In developing that skill, remembering to be realistic, make choices and create a coherent goal structure is a good way to start.

Mark Bouch2022-02-08T14:25:55+00:00Uncategorized|
Page load link
We use cookies on our website to give you the most relevant experience by remembering your preferences and repeat visits. By clicking “Accept”, you consent to the use of ALL the cookies.
Cookie settingsACCEPT
Manage consent